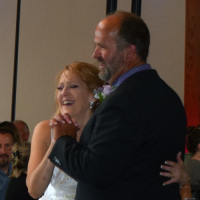 A few posts ago, I mentioned how I’ve never been asked to DJ a wedding anniversary party until this year.  Well, not only have I been asked — I was asked twice!  Richard and Christine’s wedding anniversary party took place at the Logan Ridge Estates in Hector, overlooking beautiful Seneca Lake.Logan Ridge is located high on a hill overlooking Seneca Lake from the east.  It’s practically a straight line across the water to Glenora, the only other venue where I’ve DJ’ed along this body of water.  It was interesting to get a viewpoint of the lake from the opposite side.

Although Rich and Christine were celebrating their 25th wedding anniversary, the day flowed very much like a brand new wedding — as they started off the festivities with a vow renewal ceremony.  Here are the songs they selected for the ceremony and the key moments of the reception.

As you’ll see in the photos, the vow renewal ceremony took place outside on the venue’s deck, with an incredible view over Seneca Lake.  My location inside the building allowed me to provide sound both outdoors and indoors from one place with a single sound system.  Luckily, some incoming rain showers held off long enough for the ceremony.

The rain even held off long enough that the venue manager unexpectedly decided to move people back outside after dinner for dancing–but rain rolled-in less than an hour later, so the guests (and the speaker) had to move back inside for the rest of the night.

The rain stopped by the end of the night, allowing Christine and Richard to dance the last dance of the night — the song from their first dance in 1993 — out on the deck.  It was perfect timing — shortly after the song ended, a fireworks display started somewhere across the lake.

It was great to get to know Richard and Christine and see them enjoying their 25th anniversary.  I have no idea if I’ll still be in this business long enough to DJ the 25th wedding anniversary for any of my wedding day clients, but who knows?  I’ve already been doing weddings for 8 years… just 17 more until those first couples hit their silver anniversaries!