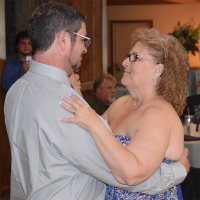 Being in my 8th year as a wedding DJ, “first times” don’t happen for me as often as they used to, but Kathy and Duncan’s 25th anniversary presented three — including one nobody was expecting!  It was my first time performing a wedding anniversary party, my first booking at Drumlins, and for the third “first,” you’ll have to read onward!Kathy and Duncan first contacted me in March.  They wanted to celebrate a quarter-century of marriage with their family and friends.  Although it wasn’t a “new” wedding — we wouldn’t do things like wedding party introductions or bouquet/garter tosses — the party included many of the traditional wedding reception events like the first dance.

Kathy and Duncan took professional ballroom dancing lessons in the months leading up to the party, and their efforts paid off!  The crowd was impressed during “(Everything I Do) I Do It for You” by Bryan Adams, and then wowed when we immediately went into “I Gotta Feeling” by the Black Eyed Peas, letting the happy couple show-off some more skills.

Just by observing them and their guests, it was evident that Kathy and Duncan were a great match from the time they first met, and their love is still as strong today, as it was when they tied the knot in 1993.

So remember how I said there were three “firsts” at this event?  OK, first wedding anniversary, first event at Drumlins. Here’s the third: first time I’ve ever had to make an announcement asking everyone to evacuate due to a fire!  Everyone was OK — we never even saw any flames or smoke.  But a manager explained they had a small fire in a dumbwaiter in the kitchen, so they had to call 911 and ask everyone to leave the building.

Fortunately, we already had dinner and most other major “timeline items” completed by that point.  But since guests were already in the parking lot, they didn’t know how long until (or if) we’d be allowed back inside, and it was close to the party’s ending time, many of them left.  When we did get the “all clear” to resume the party, we had just enough time for Kathy and Duncan’s “last dance of the night” request.

Needless to say, an exciting and definitely memorable evening!  Even though the evacuation shortened the party a bit, Kathy just shrugged it off, saying “hey, these things happen!”  Considering she and Duncan own the local franchise of Mr. Rooter Plumbing, they certainly know a thing or two about unexpected problems at homes and businesses!  Thanks for choosing me to DJ your party… congratulations again on 25 years, and I wish you all the best for the next 25 years and beyond!