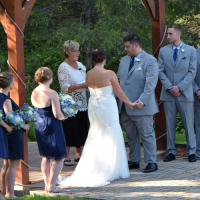 Elise and Ryan’s wedding day will probably stick out in my memories of the 2016 wedding season for breaking two records: longest distance traveled and hottest wedding day of the year. Now, I realize those might sound like complaints, but to the contrary! It was beautiful day for a drive to Hancock, where one can find The River Run Restaurant at the West Branch Resort, nestled between route 17 and the Pennsylvania border.  While intense storms caused power outages in the Syracuse area on August 13, we were far enough south to avoid the storms — allowing Elise and Ryan to get married outside under clear blue skies, surrounded by the westernmost fringe of the Catskill Mountains. END_OF_DOCUMENT_TOKEN_TO_BE_REPLACED