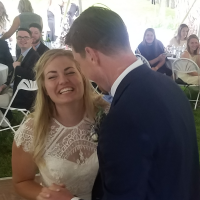 Jessie and Matt’s wedding ceremony and reception was definitely a memorable one. A unique venue, a close (but averted!) brush with disaster, and most of all, an awesome couple surrounded by an incredible crowd of fun-loving relatives and friends!

If you regularly read my blog (thank you!), you may have noticed I haven’t named the venue yet. Jessie and Matt got married and held their reception outside at a private residence, owned by a family friend. As is often the case for outdoor weddings, a giant party tent covered the dance floor and dinner seating. It was situated along one side of a large pond; at the other end of the pond is a cottage, whose front steps served as the ceremony site.

So what’s with the mention of a close brush with disaster? When I first arrived, I had to tread carefully while transporting my equipment from my van to the dance floor — the ground was pretty soggy. I later overheard the area was basically flooded by the storm, but luckily, the water had receded quickly… and with the help of some heavy-duty fans, things were considerably better by the time guests started to arrive.

Jessie and Matt weren’t very particular about how we ended the night, so “Piano Man” by Billy Joel was originally slated, as it was on their general request list. It turned into a rousing sing-along which you can see in the latter half of the 50-second video montage below. After it ended, a friend of the bride insisted we still needed a slow dance to close-out the night, and suggested Dionne Warwick, so that turned out to be the true last song of the night.

What an incredible crowd! The dance floor energy was fantastic (but you don’t have take my word for it — keep reading for Jessie and Matt’s review) and the guests had plenty of awesome song requests. My only regret: I had an issue with my nice DSLR camera, so I had to rely exclusively on my cell phone… apologies about the photo quality. Here’s a sampling – scroll down for a direct link to the full album on my Facebook Page.

View/tag/share these — and 12 more — on Facebook
More Event Photos on peterthedj.com

Peter was the perfect DJ for our wedding. He provided music for the ceremony and tore the dance floor down with his picks. He also played our favorites and was open to requests. His organization during the planning stages completely took the stress away from our planning and gave us so much confidence going into the day. Thank you Peter!

Matt, thanks for taking the time to post that review! I’m thrilled that you and Jessie were so pleased with everything… I had a blast as well! I wish you both all the best for many more years of happiness together!!

Oh, and if you’re interested in some better photos, turn to the pro: Hilde Wegner was the official photographer for Jessie and Matt’s big day, and here’s what she posted on Facebook:

My thanks again to Jessie and Matt for choosing me as your wedding DJ! Knowing there are plenty of options in Central New York, it’s always an honor and a privilege to chosen by each of my couples to help them put together a memorable wedding day!