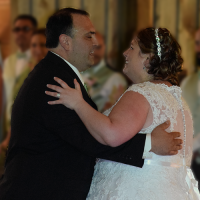 Phew!  What a busy June it has been… four weddings in four weekends!  July will be a bit calmer, so it’s time to catch up with the blog.  The first of those four June weddings brought me back to Wolf Oak Acres, where Kimberly and Giovanni’s pondside ceremony was followed by a reception in the venue’s 8,000 square foot barn.  Read on for details, photos and song selections.As has been the case for most of my Wolf Oak Acres weddings, Kimberly and Giovanni needed sound at three different locations.  Using both of my sound systems, I was able to cover all three locations seamlessly.  Here’s how it worked.

First, I set-up one system at the outdoor ceremony site.  Second, the other system was set-up on the upper level of the barn, ready for cocktail hour.  Third, I set-up the dance floor lights and uplighting on the lower level for dinner and dancing portion of the evening.

You’ll see in the photos below, that the outdoor sound system set-up was purposely set-up well off to the side, so as not to intrude on any ceremony photos.  A single speaker was sufficient to cover the crowd for the ceremony.  (Well, at least the music, anyway — the officiant insisted on not using the wireless lapel mic I had available.)

Once the ceremony was over, I made an announcement direct guests toward the cocktail hour, then headed over there myself to begin the cocktail hour music.  Once it was underway, I returned to the ceremony site, broke-down the equipment, loaded it back into my van and drove it to the barn’s lower level, to join the lighting equipment.  And it’s all done with time to spare before we need to ask guests to start migrating downstairs for the rest of the reception.

Kimberly and Giovanni’s wedding included uplighting for the dining area of the lower level, which you’ll see in the photos below.  But first, here’s what they selected for the key moments of their nuptials:

Here are some photos from Kimberly and Giovanni’s wedding ceremony and reception.  You can see even more on Facebook — just scroll down to the bottom and click the blue button.

It’s funny how things work out — I haven’t had a wedding at Wolf Oak Acres since 2016, but this is my first of what will be three weddings there this year!  My thanks to Kimberly and Giovanni for choosing me as their DJ… and my best wishes to them for many years of happiness together!