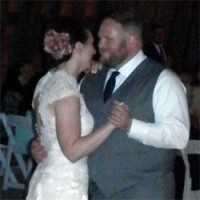 Every wedding season, I love that I seem to get a combination of weddings at venues where I’ve been before, and some at venues which are new to me. While I’ve heard of MKJ Farm in Deansboro, I’ve never been there until Rina and Jeffrey’s wedding last weekend. What a picture-perfect place for both a ceremony and a reception! And we couldn’t have asked for better weather — clear, sunny skies and perfect temperatures.

The weather was a factor because the ceremony was outside, on the edge of a pond at the top of a hill. Just like most “split location” weddings, I set-up the dance floor lights first, inside the barn where the reception would be held. Then, I set-up audio at the ceremony site. Because there were no other tents or shelter at the ceremony, I brought along my own tent. Even though there didn’t appear to be any threat of rain, the tent still protects against direct sun on the equipment, and another hazard I never considered until today — birds!

The ceremony could be heard by all thanks to a wireless lapel mic for the officiant (the mic also picked up the bride and groom) and a wireless handheld mic for the two readers. When you get down to the pictures below, be sure to see the comparison between the unzoomed and zoomed photos to see how far away the wireless mic was from my equipment.

After the ceremony was over, I packed the audio gear back into my van, drove it down the hill to the barn, and hooked everything back up, joining the already-waiting lights. Here are all of Rina and Jeff’s major song selections for the evening:

And now, the photos — you can check out how things were set-up both at the ceremony site and then down in the barn for the reception… and of course, crowds of happy guests getting down to the music!

DJ’s view of the ceremony, showing how far away the wireless mics were, and sounded great!

DJ setup for the barn reception

Neat tidbit about what a small world it is: shortly after my wife and I moved to our current home last summer, we got a visit from our local “school census” representative, who polls local households to help the local school district predict future enrollment levels. At the wedding, Rina’s mother came to my DJ table to say hello and to introduce herself as the census taker! It turns out Rina’s parents live right down the street from me; we had never realized it until Jeff and Rina spotted me mowing my lawn while driving to her parents’ house a few days before the wedding.